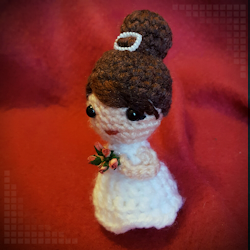 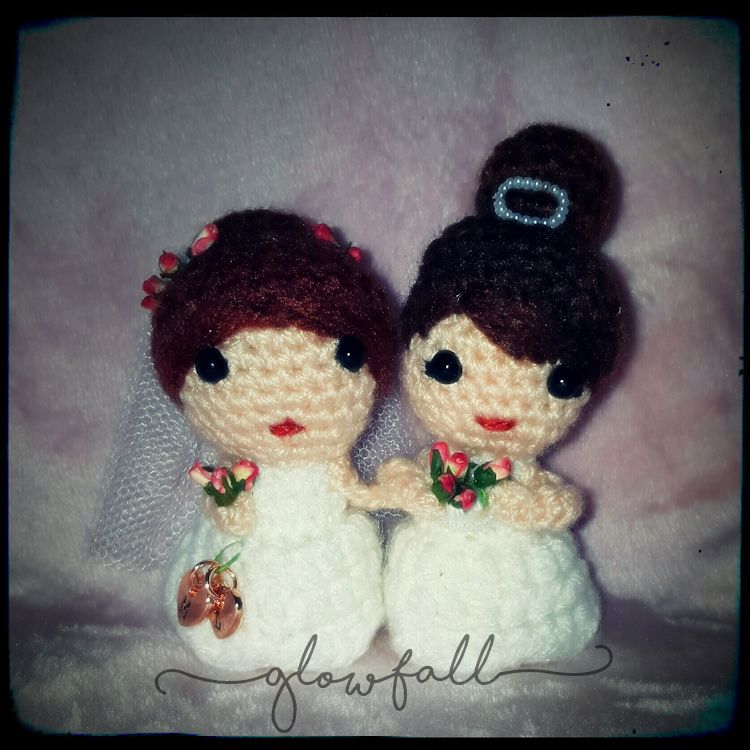 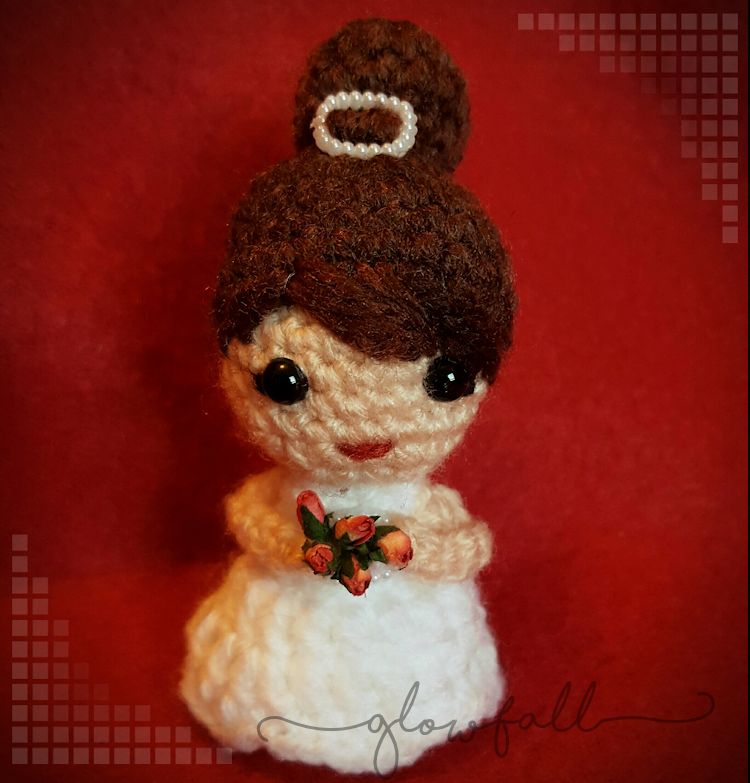 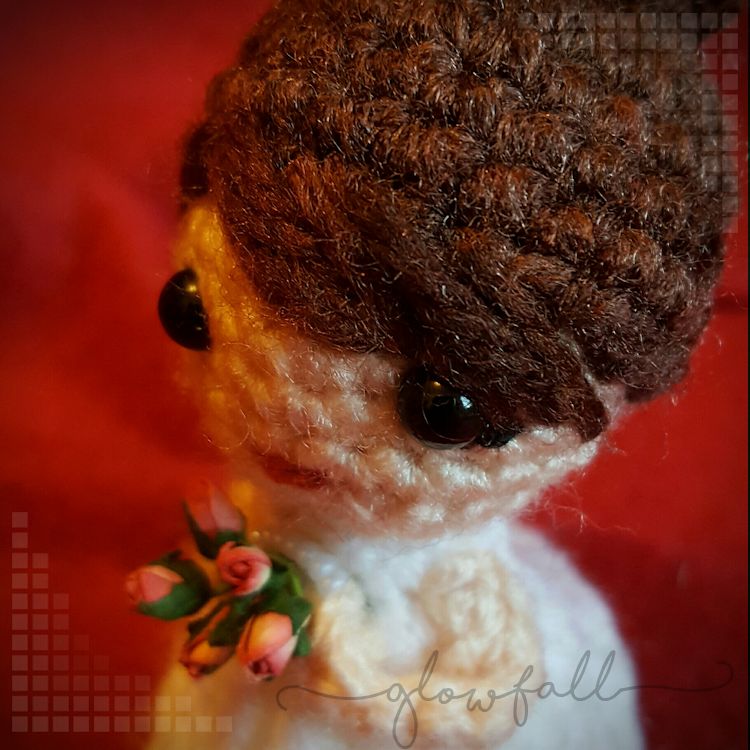 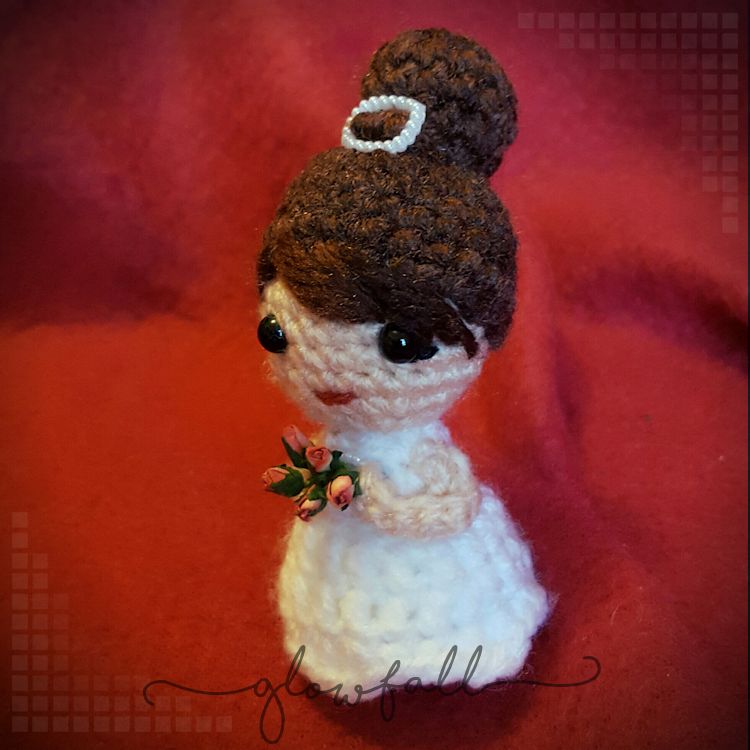 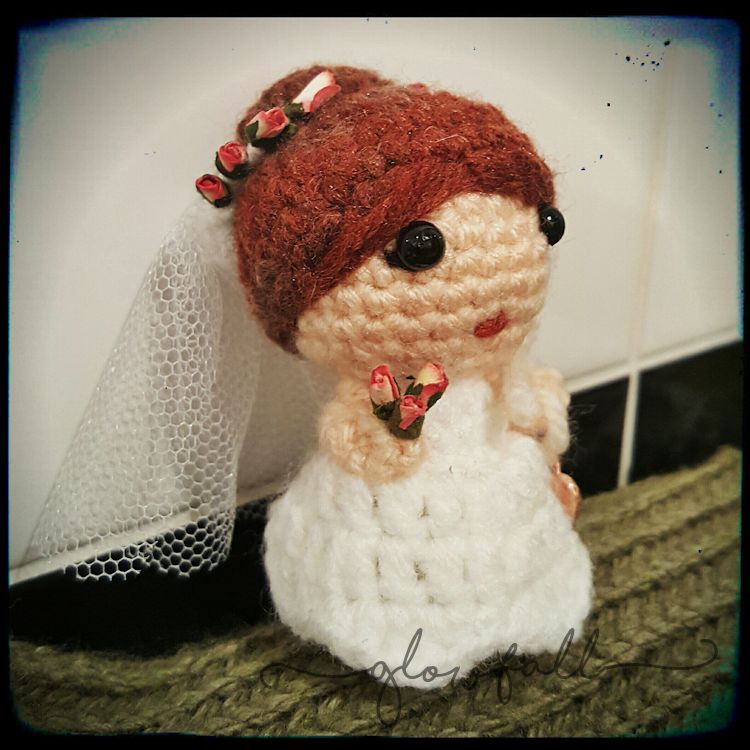 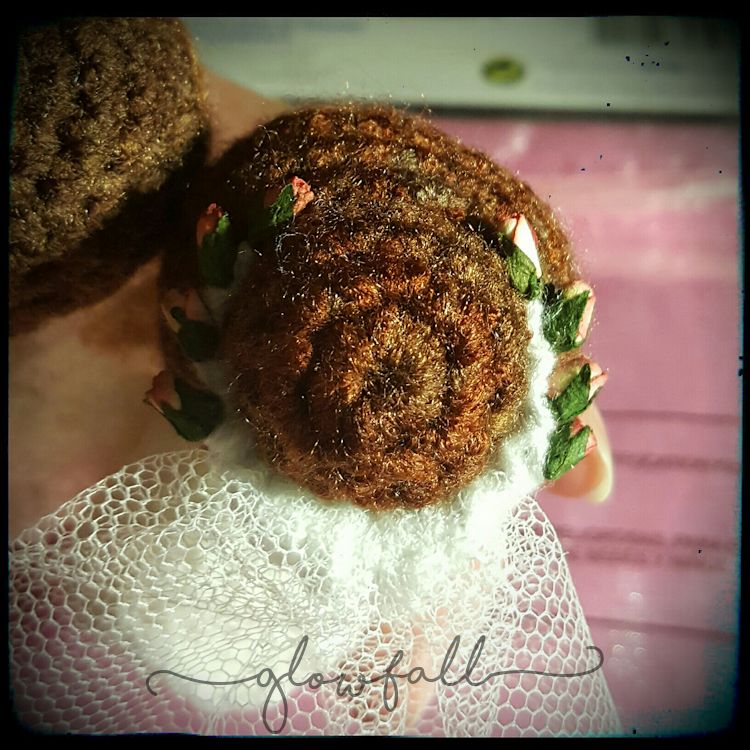 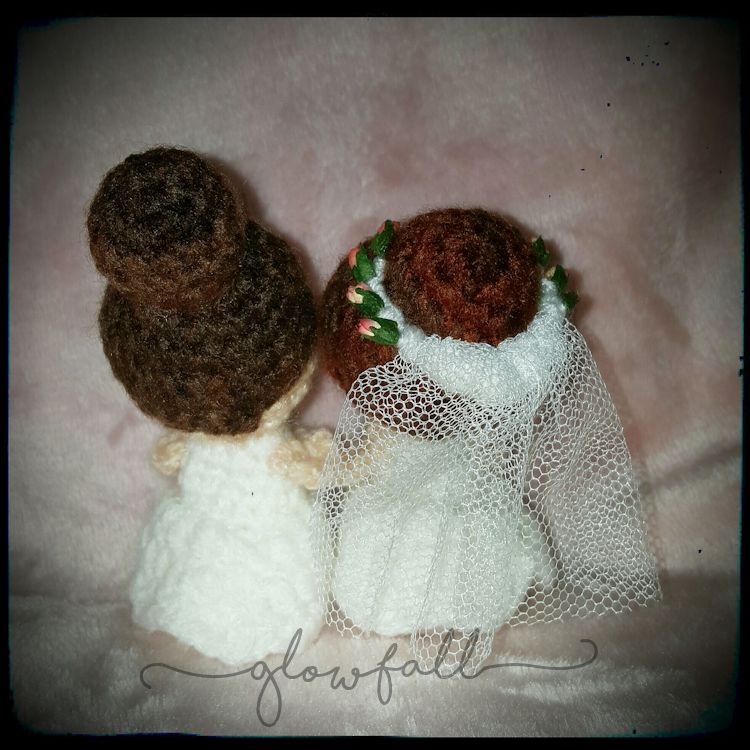 Project part 1
Finishing this took me way longer than it should have. Certainly not because of the pattern – it’s truly lovely – but because, I admit, I was too afraid it wouldn’t be perfect. This is intended as a wedding gift and as such, I wanted it to have a very particular look. Whether it ended up looking like the bride, well, I don’t know, but I am really pleased with how it turned out!

It’s such a versatile pattern and can be customised a lot. The dress is made in a really clever way too, and it was lots of fun to make!

This is made with Hayfield DK for the body, dress and head, and worsted weight Crown Crest (Poundstretcher) Colour Blend in brown for the hair. I originally made the hair in DK as well, but found it hard to fit onto the head looking natural, possibly because I made them at different times and the tension may have varied. Since the colour blend is one of my absolute favourite yarns though, so using that instead was no problem at all! Becauser of the thickness of the yarn, I skipped R5 of the hair bun though, to keep it a bit smaller.

This is probably my most ambitious project when it comes to accessories and decoration. I skipped the contrasting colour in the hair bun and instead attached a small clip from the bridal section of my local craft store as a hair clip with the same yarn as the hair. The bouquet is made using another white “pearl” clip and a few pink paper and metal roses. The bouquet is attached both to the arms and through the body so that it won’t move about.

I will absolutely be using this pattern again! It is undeniably a bit fiddly, especially when first attaching the dress to the body, but actually not at all as fiddly as I expected it to be and I’m delighted with the first part of the project 🙂

Project part 2
I finally got around to doing the second part of this project; a second bride. I wanted them to be a bit different, so I’ve changed the hair bun and all accessories. For the body, head, dress and hair cap, it’s done in the exact same way as the first bride.

Instead of a high bun, this has a more low-key updo made as follows, using worsted weight yarn:
Round 1: mr 6
Round 2: inc around
Round 3: sc, inc around
f/o with a slip stitch and sew onto the top of the hair cap with a small amount of stuffing.

The flower crown veil is made with eight paper roses on wire stems. Four stems are weaved together in a row, much like I would do a real flower crown. Make two, the bunch together below the flowers by weaving the stems as flat as possible. White DK yarn is then weaved around the whole crown and between the flowers, covering the wire but not too thickly. The veil is attached to the crown with white sewing thread and the same is used to sew the crown onto the hair, encircling the bun.

In theory, sewing it onto the hair wouldn’t be necessary as the wires bend around the bun, but I’ve done it anyway for stability.

Project completion
The two brides are sewn together arm-in-arm; again, not really necessary as they can remain in this position without attaching, but done for stability. This was done as a wedding gift, and has been given to their new home 🙂

This site uses Akismet to reduce spam. Learn how your comment data is processed.