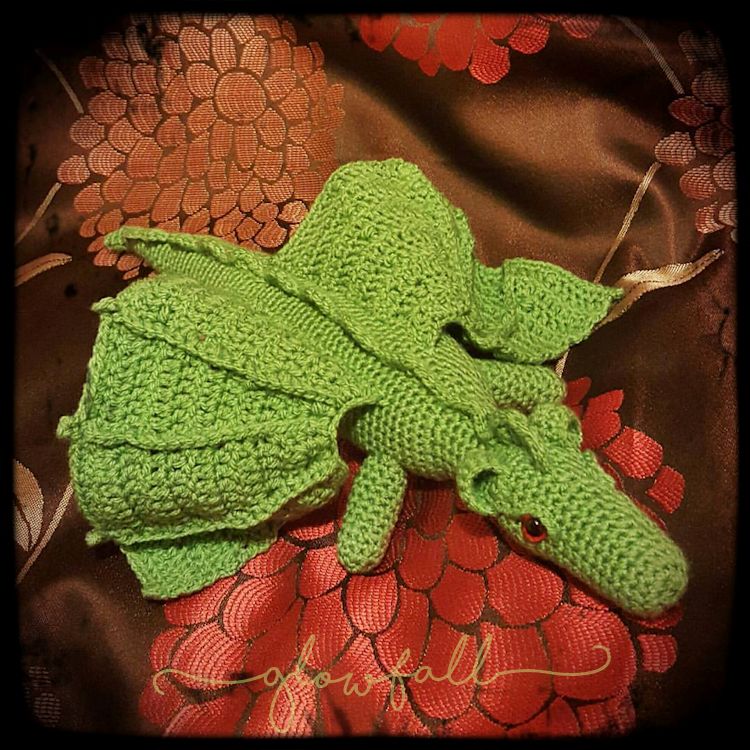 I don’t know how to do quadruple clusters and none of the results I found while searching seemed applicable, so I improvised that part of the wings. It didn’t turn out particularly well so to give them some structure, I did a straight row of sc along where the clusters should have been, three lines per wing. Still not perfect, but I’m quite pleased with it. Afterwards, I have seen discussions on the Ravelry forums that explain it and then it makes sense.. but done is done!

I attached the wings differently than the pattern called for as I felt the original wings were more faerie dragon than dragon. I see several other projects before me did the same! The back spikes are also made differently, with one bigger “spike” at the head (sc, hdc, 2 dc in 1, hdc, sc), then sl st, sc, 2 hdc in 1, sc, sl st until end of the back.

The dragon has a pipe cleaner running along the length of it to be able to turn its head. In hindsight, it should have been at least 2 pipe cleaners to give more stability and she’s also slightly overstuffed – poor baby has a bit of problems turning her head.

I must admit that I found the pattern quite hard to follow and confusing at times – but in the end definitely worth it.

This site uses Akismet to reduce spam. Learn how your comment data is processed.